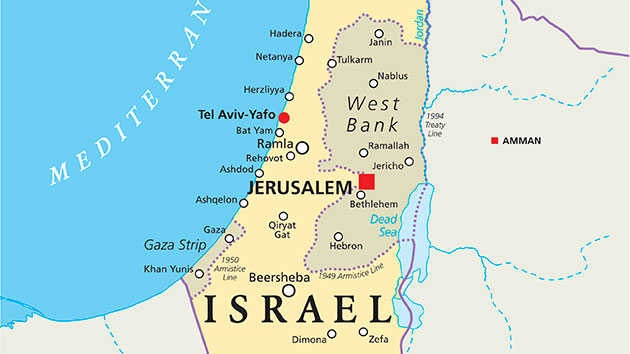 Sorry about the shitty pun in the title. Iran out of ideas. Every time Americans think they have their minds wrapped around the whole Israel / Gaza / Hamas / dead people / stuff / things situation happening on the other side of the world that we’re supposed to care about, we get another detail that throws off our perception. Due to the Israeli attack on Palestinians in Gaza on May 14th that ruffled everyone’s burkas, we’re going to dive in and hash out the mess in the comments.

As of now I’ve read enough twelve-word listicles about the ongoing riff between Israel and the Palestinian-occupied Gaza Strip to maybe kind of condense the information into the ultimate dark web slacker botched paragraph for those who want to appear like they give a crappity crap but secretly don’t know what the fuck’s going on. Then we’ll get into the May 14th attack that left 60 people dead.

Okay here we go. Israelis and Palestinians both feel that the same hunk of junk land is rightfully religiously theirs. In 1948 the U.N. divided the two groups into separate states. But the rabble-rouser Palestinians continued to try and take over Israel’s land, even though they were supposed to be at peace. Big mistake. the Israeli army fought back in a major way and actually claimed even more land than was afforded by the 1948 deal. This left a ton of Pals (cute) sequestered to the Gaza Strip, while others went to the West Bank, which, is doing better than Gaza. Israeli troops still occupied Gaza afterwards, but after some touch and go moments, they completely peaced out in 2005. Enjoy being massively overcrowded in a tiny plot of land, assholes. Current-day Gaza is hell, with around two million people, the third densest population in the world, and almost 40% unemployment. Still, Israel keeps an elaborate border forbidding Pals from entering. And Egypt, the other country bordering Gaza, isn’t much more lenient. Why? Because terrorist group Hamas won an election in 2006 to control Gaza, and seems like the Pinky and the Brain of countries – always scheming for ways to take over the land Israel occupies and turn it into an all-Pals state. Iran supplies Pals with deadly missiles and weapons, and Israel doesn’t take any chances with their bullshit. Come literally within 300 meters of the Gaza border and you’re Gaza be shot in the face.

I’m sure that was the shittiest and most inaccurate Gaza recap on the web, and you’re welcome. Anyway this all brings us to May 14th. America’s siding with Israel was put to the test when they massacred 60 of the thousands of Gaza protesters who stormed the border during a protest – claiming that they were going to return to the land that was rightfully theirs. The threat posed by the protesters as well as Hamas’ involvement and possible weapons present are all factors we should care about. Also some people say Trump’s recent moving of the US embassy from Tel Aviv to the sensitive Jerusalem could have something to do with it, and, blah blah blah, I went to state school in the South, that’s about all I got. Everyone and their mom has opinions on the deadly May 14th attack, and the media is going nuts. Are the Pals right? Are the Israelis right? Do you care? Head to the comments and let us know.

Israel must answer for this week’s deaths and the misery in Gaza. But if conflict is ever to end, Palestinians need to take up genuine non-violence. Our cover this week pic.twitter.com/Q6xz6iyC7p