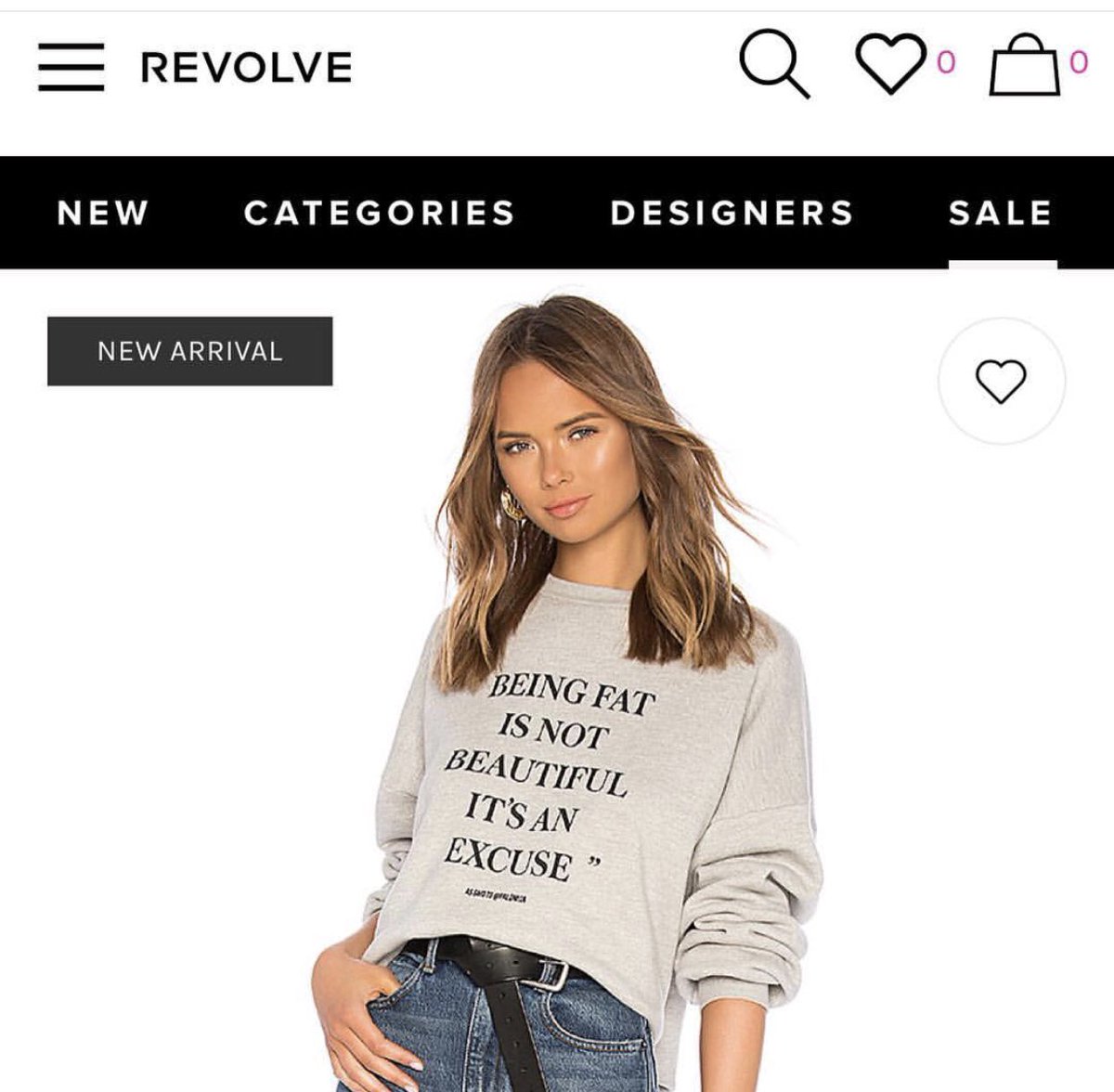 What a tangled web we weave when we’re fat. In an effort to combat online bullying with a searing droll statement crop sweatshirt, Lena Dunham has revealed herself to be even more of a stupid cow than we previously thought. Not an easy feat. Dunham teamed up with the fashion company Revolve to deliver subversive clothes for the overweight fashionista in all of us. The gear was (it’s since been abandoned) meant to feature common insults hurled at large chicks online.

The linchpin in the whole operation is that the clothes needed to be worn by overweight models in order for the quotes to be ironic instead of just hilarious. But the inaugural piece, which reads “Being fat is not beautiful it’s an excuse” was sported by some hot anorexic Russian hooker on Revolve’s website. And it sold out before the item was taken down. This is all too good to be true. Thank you Dunham. Thank you for being so half-assed in everything you put out into the world.

Naturally people pointed out that Dunham’s line was a complete flop (though not for Revolve’s coffers) and she has since released a scathing critique of her own failure for which she refuses to take responsibility. She’s nothing if not consistent. Revolve has also apologized. Dunham cow queefed up:

For months I’ve been working on a collaboration with my friend Pia’s company LPA through parent company @revolve – sweatshirts that highlight quotes from prominent women who have experienced internet trolling & abuse. Without consulting me or any of the women involved, @revolve presented the sweatshirts on thin white women, never thinking about the fact that difference and individuality is what gets you punished on the Internet, or that lack of diversity in representation is a huge part of the problem (in fact, the problem itself.) As a result, I cannot support this collaboration or lend my name to it in any way.

While Revolve put forward an even lengthier statement:

What was conceived as a statement on today’s internet culture and its treatment of women has gone terribly wrong. We at LPA were so honored when Lena Dunham agreed to work with us on this capsule collection and, most importantly, thrilled at the exposure our work would give to such a serious issue. We coordinated each aspect of the collection itself, to the chosen quotes to the design. We were proud of our final product, the conversation it would start and – most importantly – the direct effect it would have on such an impactful charity in ‘Girls Write Now’.

Where we faltered was not intention, sincerity or conception, but in my own lack of communication that lead to how the collection was portrayed on Revolve.com and the pre-mature release of the e-commerce imagery, a day prior to launch. We were planning to launch with an image of Lena in the sweatshirt along with our statement and explanation. I cannot apologize enough to my good friend Lena, and others, to all of LPA’s fans. We work hard to make the right choices every day, understanding the platform and the opportunity that we are lucky enough to have, and we are so sorry to have let you all down.

We know the quotes within the collaboration were shocking, which was entirely the point. To spotlight how we’ve normalized the way we bully and speak negatively to one another via the internet. Given this controversy, we support Revolve.com and join them in their removal of the collection from our site. We are also proud to make our own donation to ‘Girls Write Now’ – in honor to their commitment to this admirable cause.

I just wish we could have seen the quotes featured on the other pieces from the collection. “Your mama so fat she makes Lena Dunham look like a human woman.” Any other good ones?