All of America has heard of the “Cash me Outside Girl” by now but if you haven’t here is the scoop. Her name is Danielle Bregoli and at 13 she made an appearance as a spoiled brat with no respect on Dr. Phil, she made this visit to Philz viral by sassing Dr. Phil and telling his audience to catch her outside, to catch these hands. She was going to kick the audiences ass.

Her mom claims she brought her on the show because she couldn’t handle her anymore, in 2016 alone the police were called to the house they lived in 51 times for various reasons. She would runaway from home, do drugs, beat her mom and even steal cars. Girl thought she was living her own version of 8 Mile out in Florida.

Whats funny about Danielle’s trouble with the law is the girls dad is a COP. She claims the Palm Beach County Sheriff Deputy abandoned her and her mother when she was young. Maybe thats where her lack of respect for authority started..

It’s clear she’s had some mental issues going on for a while, I mean look at the eyebrows she had on the Dr. Phil show – bitch this is national television! ALSO the shaved widows peak? Girl is disturbed.

Despite having 17 MILLION followers on Instagram, the public generally hate her and attack her online all the time, she’s been accused of being racist and also for pretending to be black, which I don’t think would make her racist?

All the hate finally got to her and she’s announced she’s taking a break from Instagram for her mental heath. Good luck Danielle… 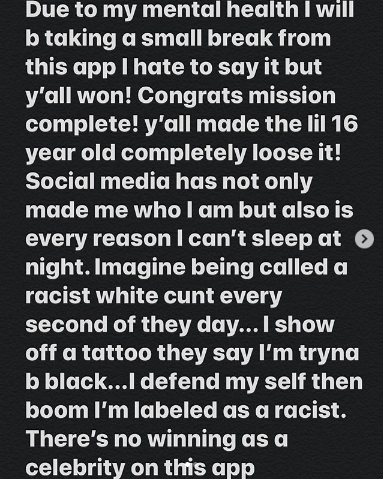