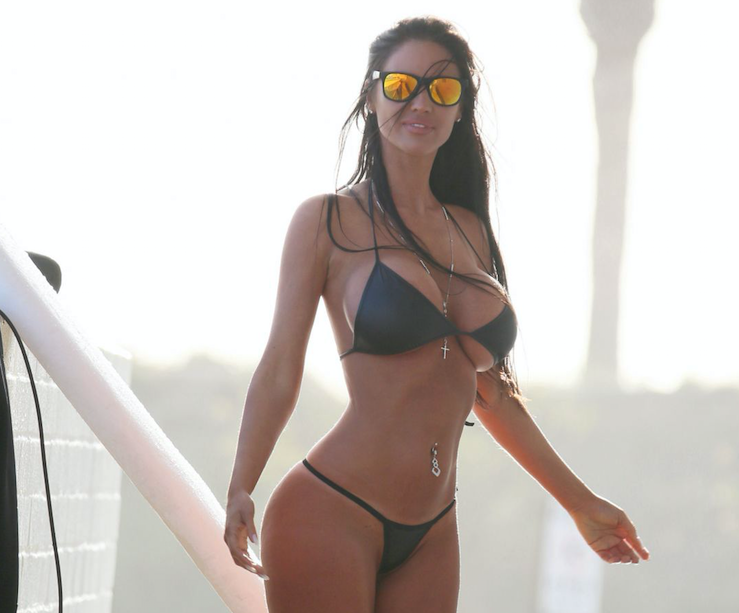 Charlie Riina in A Bikini

If you're looking for a measuring stick to assess which inflated bikini model to take as your wife, consider the woman who pours water on her tits on the coldest day in Los Angeles and still maintains a smile. READ MORE

Who came up with the ground rule that a chick can't show her tits on camera, but grabbing the shit out of her implants provides sexually graphic cover. Your snatch is visible. Let's cover that up with a water... READ MORE

Two years into it, every single one of these non-existent bottled water models has their own motif. Charlie Riina has the leather pants and coat with no shirt thing. You can’t dress like that for a job interview, unless... READ MORE

I think the whole fake bottled water campaign has hit its peak. I’m not sure where they go from here. They’re not actually selling water, which is something you could do as a water selling enterprise. They’re just photographing... READ MORE

At some point this chick is going to shove that bottle directly up her twat and finally move some water. It’s the natural next step in using sex to sell a product nobody wants. You might pay twenty bucks... READ MORE

Another Topless Water Chick And Shit Around The Web

They come. They go. They take off their tops for ridiculously small amounts of money. It’s bottled water art is what it is. Charlie Riina shows off her tits to sell expensive water. (Egotastic All-Stars) Miley Cyrus in see-through... READ MORE

It’s hard to gauge what parts are left real on this chick. She’s a bit like Vader. More machine than man, though more woman than man still. It’s hard to explain. I’d fuck her over Caitlin Jenner if that... READ MORE

People imagine if you visit Los Angeles there are ambitious chicks on every block flashing their big fake knockers for some dude with a camera and impossible to nail down ethnic descent. It’s only mostly true. And only in... READ MORE

Charlie Riina in A Bikini

I’ll concede that if this chick could make the water come directly out of her nipples, I’d buy it in six packs. Short of that, I’m not sure how you place a value on bottled water. Artesian well water... READ MORE