As you may be aware of, Bella Thorne has been working on a few new movies over the last year and one of those movies is Chick Fight. It’s an action comedy being directed by Paul Leyden, who you may know as the director of a TV show called Cleaners. Bella Thorne was cast to star in the movie along with Malin Akerman who is also producing the project.

The movie is about a girl named Anna, played by Akerman, who just found out that her dad is gay and faces some roadblocks inner life like her burning down her building (this part sounds like our narrator in Fight Club) and she begins to spiral. Thats when her friends take her to a Women’s Fight Club and I assume where she meets Alec Baldwin who also stars in the movie, which doesnt really make it an “All-Female Fight Club” but in 2020 you are not allowed to just assume Alec Baldwin’s gender, so ok cool Female Fight Club. Anyway you can see Alec training Malin Akerman in one of the shots below, along with Bella Thorne locking her legs around Malin.

Refinery29 told us back in December that “An All-Women Fight Club is in the Works” when talking about this movie but I’m not really sure if they just made that up because of the idea of having a “fight club” appear in the movie or if they were told some inside info. The guy who wrote it is a dude named Joseph Downey, his only other writing credit is for “Batman: Personal Issues”, and to be honest I didn’t look to see if there are any interviews with him or quotes from him on this movie.

Bella Thorne spilled the beans and posted a few shots from the movie, the first look we’ve seen so far as not a lot is known about the movie. It will be interesting to see if the film actually plays on the story of the OG movie, or if they just do their own weird action comedy feminist movie that has nothing to do with anything. Chick Fight only began filming 18 days ago in Puerto Rico so no release date yet! 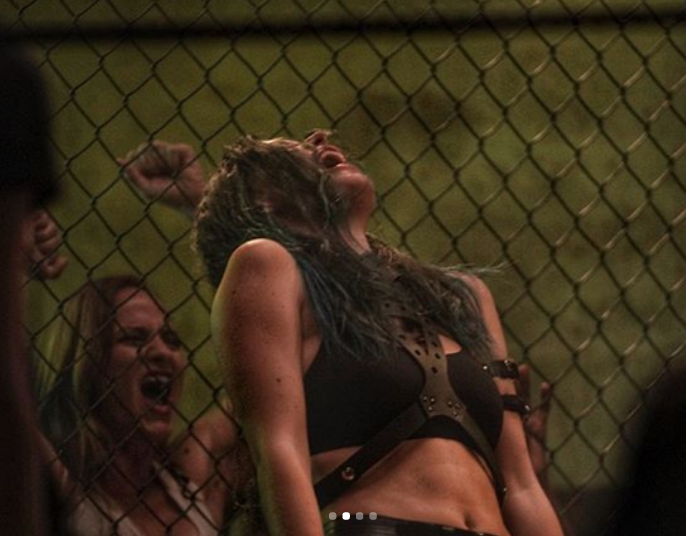