Celebrity photographer Annie Leibovitz has entered the DGAF years of her prestigious career, and for her most recent star-studded Vanity Fair cover, rolled up to the set for ten seconds, snapped a pic with her iPhone X, texted it with the jackoff hand emoji, and said lattttter bitches. This is one of the worst pictures I’ve ever seen, and before we get to the nuances – like the fact that Nicole Kidman was obviously replaced with the painting of her 90’s self that she keeps in her car – we should get to the misstep that has Twitter twatting – Reese Witherspoon’s third leg.

Leibovitz mistook Winfrey for a comfy sofa and decided to have half the actors rest on her, and thanks to complete negligence, Witherspoon looks to be exposing a third leg while grinding up on her La-Z-Winfrey. Once people realized that this pic features a Buzzfeed listicle-worthy photo mishap, all hell broke loose on the Internet. And the best, the BEST part is that ol’ Jessica “Transformative Social Change” Chastain‘s dream of being at the crossroads of sophistication and progressiveness in this pic for Vanity Fair’s “Hollywood Portfolio: 12 Extraordinary Stars, One Momentous Year” issue is suddenly a joke. All thanks to Witherspoon’s third leg.

But Reese is just the tip of the shitty picture iceberg, and upon further viewing, you might notice that Jessica Chastain’s right eye in the pic is oddly red and blurry. Also, why is every single woman leaning on something like she was just slipped an Ambien and can’t stand up? I don’t see James Franco anywhere. Allegedly. They didn’t even pull out Harrison Ford’s fancy wig for the occasion, and again, are they really trying to pass off that thing in the bottom left corner as Nicole Kidman? For shame. Here’s the blurb from Vanity Fair in case you need to push out a bowel movement:

The films and TV shows represented by the actors in this year’s Hollywood Portfolio—which for the first time offers a behind-the-scenes look at the shoot—took the #MeToo movement in stride, offering strong women in leading roles, as well as strong men supporting them. Here we have Reese Witherspoon and Nicole Kidman summoning the women’s battle cry of Big Little Lies alongside Tom Hanks as Ben Bradlee, the indispensable sidekick to The Post heroine Katharine Graham. There’s also Claire Foy and Gal Gadot, embodiments of their formidable characters, the Queen and Wonder Woman, and one possible future female president in the mix. Movies have always thrived on relevance, and this year’s cover stars don’t hesitate to make a statement about the times we’re living in and the changes that need to happen.

Actually I should have said “Here’s the blurb from Vanity Fair that no one’s going to read because they’re too busy debating this year’s ‘the dress’ – Reese Witherspoon’s fucked up leg.” 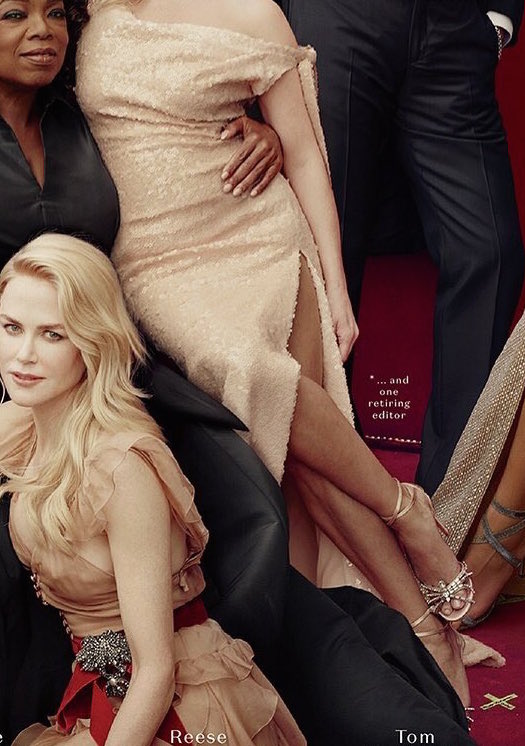