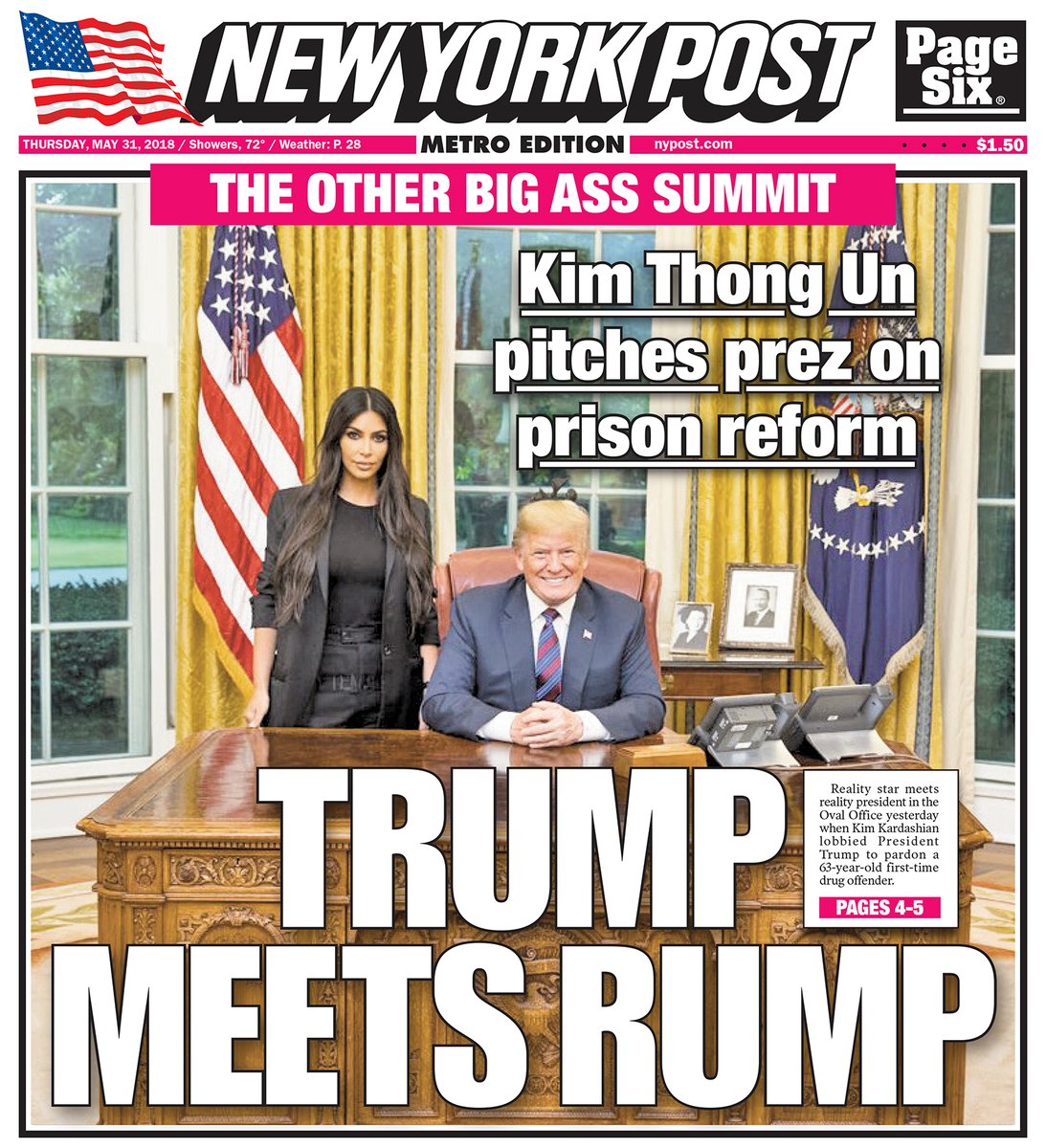 A prostitute meets up with a john. What a scoop. Even if I wanted to write for something besides the dark web, I’d still most likely be faced with covering the going ons of Armenian hookers, because the mainstream news and celebrity gossip has converged into an irrevocably tangled pile of smut. And in the middle of all the smut is one very special slut who recently blew up headlines by meeting with Donald Trump to discuss prison reform. Because in the year 2018, we look to a reality star who got her start carrying around Paris Hilton’s purse while she shopped at Kitson to reform our prison system. I think Hilton purse carrying that was what she minored in actually. And she majored in, well, I think you know (all links NSFW).

The slut in question is of course Kim Kardashian, and her qualification of having banged roughly half the US prison population seems to be enough to qualify her to make her plea to Donald Trump for the release of a woman serving life in prison for a drug charge. Naturally the meeting garnered strong reactions from critics and supporters of both parties involved, but it’s the New York Post’s salacious and punny coverage that has everyone defending Kardashian. With the text “Kim Thong Un,” Trump Meets Rump,” and “The Other Big Ass Summit,” The Post somehow had the nerve to reduce this woman, of all people, to a sex object by mentioning that she wears thongs and that she has a butt. I would say Kardashian was asking for it, but this is just too much. To degrade this woman? This woman right here? The damn nerve.

Everyone from Alyssa Milano to Sarah Huckabee Sanders is criticizing the NY Post for its sexist coverage of this meeting of the minds. But the joke is on everyone involved, including us. Because the extent to which the media capitalizes on and hypes the current White Fun House has created so much static that only the strongest frequencies can survive. And “Trump Meets Rump” is pretty damn hard to miss. The NY Post knows that you shouldn’t click on a headline that degrades a woman. But they also know that you will.

This cover is sexist and pathetic. Do better @nypost. https://t.co/RxJcm8K34s

honestly, the best thing about being verified – apart from the HUGE ego boost – is that I don’t see most of the replies to this tweet unless I go looking for them. people tweeting sexism @ me and their 11 followers are screaming into the void.

#GetAGrip
Not a Kardashian fan but your cover is sexist, rude, disrespectful & rag level writing.

Alice Marie Johnson, WRONGLY IMPRISONED FOR LIFE ON A NONVIOLENT DRUG CHARGE that KK is trying to help, thinks this issue to be pretty important.

I hope an editor set this right

Yeah, Kardashian isn’t the most polished or traditional policy advocate – no one would argue with that – but reducing her to a body part is unnecessary, misogynistic dehumanization. We can and should do better. Even you, @nypost. https://t.co/v0VyABRFY4

Disgusting headline, @nypost. @KimKardashian was meeting with President Trump about a critical issue and you lead with her ass?

This is unacceptable sexism. No woman deserves this.

Thank you for using your platform to raise awareness for the issue of prison reform, Kim. https://t.co/P43Vq2mPLR