It seems like ugly runs in Amy Schumer’s family. Ugly Amy received an ugly gift from in-laws that ended up being an ugly baby shower cake complete with partially prolapsed butthole. I’m not surprised that Schumer’s cake looks like a joke gone wrong. Because her life is joke gone wrong. And most of the babble she got paid to say on stage were jokes gone wrong. And Jesus Christ, still the most noteworthy news Amy has to contribute is centered around her joke of a vagina. Thoughts and prayers to anyone that’s ever seen that thing in person. Chris Fischer, you’re either going blind like Bill Cosby or you’re a man that knows no standards. Because you’ve basically reproduced with a hairless Yeti. I hope you’re booked and charged for several counts of mythological bestiality.

With her due date growing closer, Amy Schumer announced that she had received a very “horrifying” gift from her husband Chris Fischer‘s sister Molly Fischer: a cake depicting a crowning baby, with a doll head poking out to greet the world.

I really thought those bachelorette party BBC cakes were bad, but this cake sure gives that shit a run for its money. And now it’s inspired the horrifying question in my head of “what color are Amy’s pubes really if her sister-in-law used chocolate sprinkles?” I don’t want to know the answer but the curiosity of knowing just to know is killing me. But I rather drink bleach on the rocks before typing that question into Google leads to the discovery of a possible mukbang sex tape Amy may have floating around.

My sister in law. And I can’t stress that enough IN LAW. surprised me with a horrifying cake and i can’t thank her enough. So I won’t thank her at all. @mofischhh something is truly wrong with you and i love you. #haunting #butthole 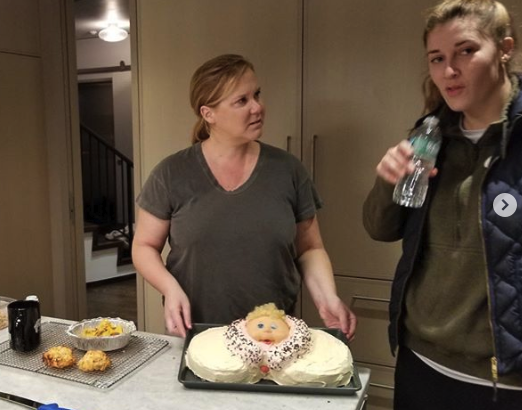